But the records are safe. 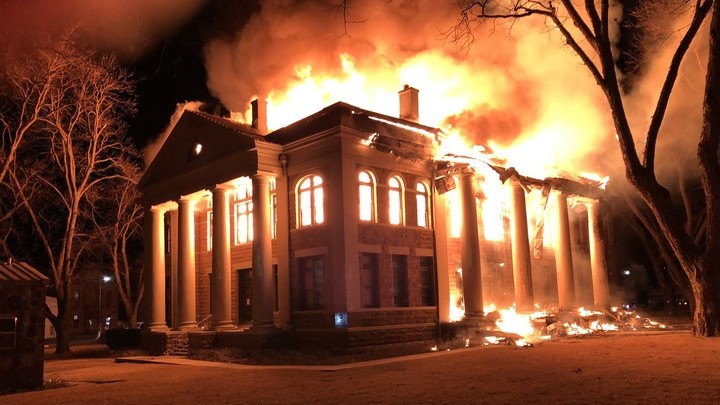 Wow...Sounds like there will be more news to follow. Glad to hear the records are not lost.

What a shame. Beautiful building. That'd be a nightmare if the records had also burned.

In 1937 the Deschutes County Oregon courthouse burned while a State audit of the county's records was being conducted. Arson was "suspected" but no one was ever charged. I don't think those telephone wires cut themselves prior to the fire.

"By 1935 the county had outgrown its offices and moved into its third home, the old Central School. The County was actually renting the building and had negotiated a purchase price of $35,000 from the school district when on February 10, 1937 a mysterious fire destroyed the building.

Coincidentally, County Clerk Mable Livesay had reported problems in balancing the books and had requested an audit from the state, which had begun the day before the fire broke out. After working all day, the auditors requested to see the books from the time of the county's formation. However, due to the fire, most the requested records were lost including marriage indexes, mortgages and deed index, warrant records, school superintendent records, and the complete law library. Tax records dating back to the formation of the county were found however, secure in the safe.

Investigators discovered that the fire was started in the southwest corner of the building, on a night when the winds were blowing from a direction that could rapidly spread the flames. Telephone wires to the building had been cut forcing the railroad switchman who first saw the blaze, to run 6 blocks to the fire hall. Naturally state officials suspected arson, but to this day no one has been charged with setting the fire."

Where's Kojack and Colombo when we need them?

Yes I know they would have only been kids then but still....

I had to go back and see when Deschutes River tract was platted in your other post.  Thought maybe the CS burnt the court house after approving that plat 🙂 but the fire was 25 years earlier.  Happy Friday, Jp

We used to have a joke in the office about that. Always wanted to tell someone "well, that road was supposedly established in 1945 but there are no records to be found. Probably burned up in the 1937 courthouse fire"

Drive by that courthouse about twice a month visiting my son in San Angelo, you drive right at it before I turn. If I remember right, they had done a pretty big remodel maybe 8 years ago, the building looked like a stone castle. The records to have been removed and it burns up just sounds fishy, not saying anything but....

One courthouse in the area burned about 1901.  That is the only one I visit with such a history.

Reply
Page 1 / 2 Next
Please Login or Register to reply to this topic.
All forum topics
Previous Topic
Next Topic